Home/Uncategorized/Oulton Park – 22nd May 2021
Previous Next

“Friday testing started with a three and a half hour journey to Oulton Park. In contrast to Brands Hatch the weather was rather grim; it was cold and wet with not a single bit of blue sky in sight. With dry weather forecast for race day, I decided not to push the car too hard in the wet but instead use the sessions to build experience and confidence in the tricky conditions. We had smooth running throughout the day where we had no mechanical issues and I managed to​ keep it all on the black stuff. 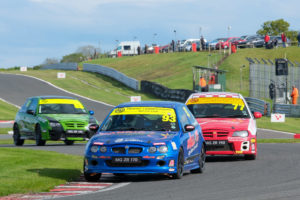 This weekend there were 21 cars out on track, two more than there were at Brands Hatch. 11 of these cars were in my class, the 170’s.

Race day came around but we were still stuck with the rotten weather for qualifying. This was once again dominated by yellow flags and a safety car, this led to a lot of lap times being deleted, including my fastest time. This meant for race one I lined up 9th overall and 5th in class and for race two I was 7th overall and 4th in class.

The drama for race 1 started long before we got to the grid. With the track now drying everyone was faced with the choice, to risk it on the dry tyre or play it safe and use the wet tyre. I went with the dry tyre as had received information that there was a dry line the whole way around the track. When I got out on track it was evident that I had made the correct choice with the majority of the track being dry but greasy and only a few damp patches. Unfortunately, my grid box was off the racing line meaning that it was still slightly damp, this meant I didn’t get as good a start as I had hoped and this saw drop to P7 by the exit of the first corner. On lap two the chaos unfolded with two cars suffering from engine failure, one of the cars was in my class (James Dennison) and the other was in the class above (Adam Jackson). As a result of this oil was dropped on the racing line making it extremely slippery for all following cars, this caused James Cole (170 class) to go off and hit the barrier, luckily for him he was able to carry on.

At the next corner John Booth (170 class) had a half spin as a result of still having oil on his tyres. This allowed me to gain two positions in the space of two corners promoting me to P4. However, John Booth was quickly back on the pace and started to make me defend going into corners, this lasted several laps until he dropped a tyre onto the grass, spun and ended up beached in the gravel. This then called for a safety car, allowing me to catch up to car 36, Josh Bacon. With the safety car coming in after leading the pack round for several laps, there was only enough time for a two lap sprint to the line. I got a very good restart and was tucked in under Bacon’s bumper but there wasn’t a chance to overtake into the first corner as there was still oil down from Adam Jacksons 190, however Robin Walker in his 190 used his extra straight line speed to come along side me down the pit straight and into the first corner. He then ran wide as he slipped on the oil which then forced me to run even wider and we narrowly avoided contact. After getting back on track I started to close the gap down to Bacon but there just wasn’t enough laps and ended coming across the line in P4 just 3 tenths of a second behind him. After getting back to the pits I found out that Tylor Ballard had a 10 second penalty for jumping the start, this then promoted me into P3.

Race 2 was far less dramatic, I started P3 in class due to James Dennison not starting because of his blown up engine.

This time round the whole of the grid was bone dry so I was able to get a good start and maintained my P3. After a few laps I was caught by James Cole and we battled hard for several laps but eventually he slipped down my inside going into turn two and then it was a drag race to turn 3 in which he came out on top as he had the inside line. Later in the same lap the 190 of Paul Savage used his superior power to pass me on the back straight but he braked early allowing me back up his inside, unfortunately he was unaware 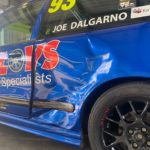 I had done this and turned into me. This left a huge dent in the rear of the passenger side of my car and knocked the wheel alignment out; this caused my pace to drop off. In the closing stages of the race, I was being caught by John Booth and Josh Bacon but luckily for me the chequered flag came before they were able to get on my tail.

Overall, it was a good weekend racing and I was able to bring home good points and even some silverware, next stop is Silverstone GP on the 12th/13th of June.

Click here to view the Oulten Park May 2021 Results PDF

About the Author: Caroline