“This was my longest weekend so far this season with it being a three-day event, on was testing on the Friday, qualifying and race 1 on Saturday and race 2 on the Sunday.

Blue skies on Friday set the mood for testing. I had five sessions spread out through the day, this gave me a total of 3 hours track time. The first session went well, I was able to re-familiarize myself with the 3.6-mile track. Unfortunately, my luck turned for the worst in the second session as I had a wheel bearing fail part way through the session, this saw me stuck in the pit for the rest of the morning. Thankfully 4G racing leant me their spare bearing and soon I was back in action. Afternoon came and I was playing catch up for the time I had missed in the morning. By the end of the afternoon, I was happy with the progress I had made with only being around a tenth of the leaders. . 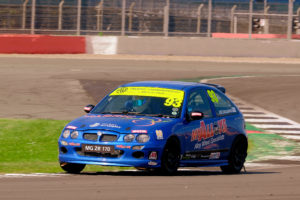 Saturday morning was the start to another sunny day, 11:10 saw the start of qualifying in sweltering conditions. With Silverstone being a power track, I ensured I got out on track behind another fast 170, this gave me the slipstream on the long straight. I got a couple of quick laps in early before the tyres over heated and went off with my fastest lap being a 2:37.6, this was good enough to put me P3 on the grid for race 1 and my second fastest lap a 2:37.7 put me on pole for race 2.

At 15:30 race 1 saw even hotter conditions than in qualifying, I lined up in my grid box which saw me on the outside for turn 1. I got a good start and got my front bumper alongside the rear of James Dennison however wasn’t able to make much progress due to being on the outside for turn 1. Coming onto hanger straight positions had been mixed up, it was Josh Bacon in P1, Fergus Campbell in P2, myself in P3 James Dennison in P4 and Tylor Ballard in P5. At Stowe at the end of the straight Fergus ran deep which allowed me to come up alongside him going into Vale, however I was on the outside so I wasn’t able to make the move stick. My move on Fergus made me vulnerable to James behind who slipped his car down my inside, we were then side by side all the way down to Abbey where he eventually got passed me which also left the door open for Tylor Ballard to follow him through. It then became a 5 car que for the lead with Bacon just starting to get a gap to second place. After a few laps James Cole was hot on my heels but after a hard battle that lasted several laps he overtook me on the exit of Brooklands. The next lap Fergus Campbell suffered a throttle problem making him have to retire from the race. This saw me come across the finish line in P5. 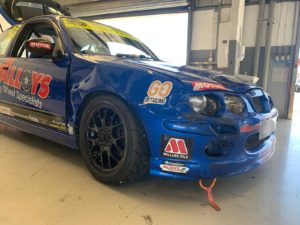 On Sunday I was once again blessed with beautiful sunshine and even higher temperatures, at 11:45 I lined up on pole for the second race. I got a great start but got boxed in by two of the 190’s ahead this allowed James Dennison, Fergus Campbell and Tylor Ballard to get ahead. The safety car then came off as James Cole was beached in the gravel. After the safety car I was back on the tail of the top 3 but unfortunately after a couple of laps my car cut out and by the time I got it going again I had dropped down to P6 behind Patrick Booth (who for this race had entered the 170 class). After a good battle with him I managed to get myself back into P5 but the chequered flag came out before I was able to catch up to P4.

Overall, not the best weekend but there were positives to take like my pole for race two. Now my thoughts go to my next weekend at Donington on the 17th/18th of July.

About the Author: Caroline